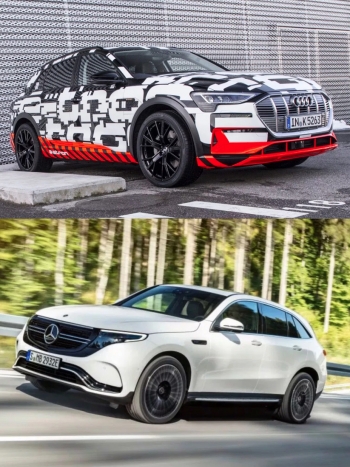 The good old ‘Tesla Killer’ moniker, which the media often apply to virtually any new electric vehicle, is coming back into the spotlight as German automakers are launching a new EV offensive.

Here’s what you need to know in order not to fall for it.

With Mercedes-Benz, Audi, and BMW all making EV announcements this month, the media is quick to call all these vehicles “Tesla killers”.

First off, let me start by saying any new electric car, as long as it is a good vehicle, is a positive for the EV industry in general and often Tesla too since it is increasing options and awareness, which is still one of the biggest issues for electric vehicles.

Secondly, all these recent announcements need to be taken into perspective.

The way I see it, Mercedes-Benz and BMW are trying to respond to Audi and not Tesla.

In the grand scheme of things, yes, Tesla has put a lot of pressure on automakers, especially premium automakers, to come up with new electric vehicle programs.

But Tesla has had the lead for a long time with the Model S being on the market for 6 years and the Model X for 3 years.

In the short term, Mercedes-Benz and BMW are seeing Audi beating them to market with an electric SUV.