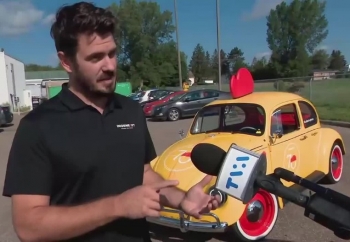 A delivery VW Beetle converted to electricity present at SVEM

Ingenext the engineering division of Simon André Electric Vehicle in Trois-Rivières will present the 1967 Volkswagen Beetle designed for Rôtisserie St-Hubert at the Montreal Electric Vehicle Show at the Olympic Stadium.

The Trois-Rivères firm has achieved a technical feat: converting an old Beetle from gasoline to electricity. This was a tailor-made order for the St-Hubert restaurant chain, which will use it as a promotional vehicle to mark its 70th anniversary.

An electric motor has been grafted to this Beetle, its power has also been increased tenfold from 40 to 280 horsepower. “Putting a Tesla motor is a first. Also with a Volt battery. It's a unique project, ”commented Guillaume André, from the company Ingenext.

A model of the vehicle, reduced to parts, was found in an old barn in northern Montreal. It has been completely rebuilt; bodywork, wheels, brakes. An intelligent car management system has been added. “The challenge was first to put a battery and an electric motor and to respect the weight. To also respect the identity of the car and really it looks like a Beetle from the 60s. ”The vehicle will travel the roads of Quebec and will also make deliveries as part of this anniversary.

Do not miss the opportunity to come and see this attraction at SVEM which will be held at the Olympic Stadium in Montreal on September 17, 18 and 19.

All the most popular brands in one place

Consumers won't have to go to multiple locations as all of the most popular brands will be under one roof.