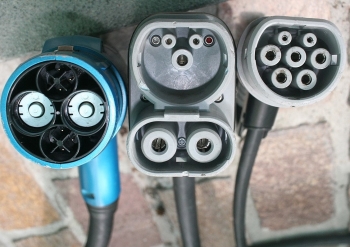 Recent and upcoming EVs are designed for DC fast charging speeds of 100 kW and more, and are overwhelmingly favouring CCS as the standard charging architecture. Next-generation charging networks in Europe and the US are also favouring CCS. Despite its early lead, CHAdeMO now looks to be falling behind.

CHAdeMO, the DC charging standard formalised by Japanese manufacturers and Japanese power companies in early 2010, was the first and only DC charging option until the emergence of CCS in 2012–2013. CHAdeMO originated out of Tokyo Electric Power Co.’s DC connector design. TEPCO had trialled numerous EV infrastructure projects between 2006 and 2009 in collaboration with Nissan, Mitsubishi, and Subaru (amongst others). The Mitsubishi i-MiEV was the first mass-produced EV to go into production with a CHAdeMO port from 2009 onwards, and was quickly followed by the Nissan Leaf.

CCS (Combined Charging System) got started in early 2011 as a collaboration between the SAE (a mainly US technical standards organisation that has close links to GM) and the European Automobile Manufacturers Association. The headline idea behind CCS was that the design allowed for both AC and DC charging to be combined within a single plug design (thus Combined Charging System). CHAdeMO plugs are DC only, with EVs required to have an additional and separate AC plug.