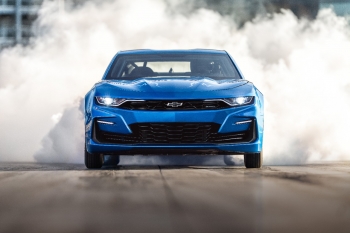 In celebration of 50 years of the original COPO Chevrolet Camaro production race car, the carmaker has announced an electric concept version of the car with over 700 horsepower and 600 lb-ft of torque.

The Detroit automaker, best known around the EV community for the Chevy Volt and Bolt EV, is dipping their toes (at least as a concept) into the electric sports car with the eCOPO announcement. The car is expected to have a 9 second quarter-mile time although testing is still in process.

If this is achieved it would blow away the quarter-mile time of the Tesla P100D and perform nearly as well as the upcoming Tesla Roadster. But not quite.

We have seen plenty of conversions of Chevrolet Camaros and even more powerful Chevy’s such as the pricey Corvette Genovation GXE. Now that we have an electric Camaro concept from Chevy itself, we hope this is a peek at the automaker’s future product portfolio.