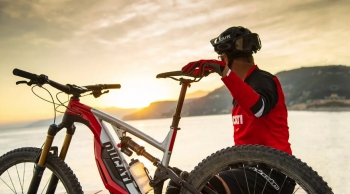 Ducati, the famed Italian motorcycle manufacturer, hasn’t released an electric motorcycle – yet. But they have dabbled in electric bicycles with various partners.

Today at the EICMA Milan Motorcycle Show they unveiled their newest electric mountain bicycle, the MIG-RR.

Ducati’s booth at EICMA was understandably packed. Press and industry representatives alike were jockeying for position around their motorbikes.

But off to one side, and surrounded by its own decent yet admittedly smaller crowd, was Ducati’s new electric mountain bike.

The Ducati MIG-RR electric bicycle was created as a partnership between Ducati and Thok E-bikes.