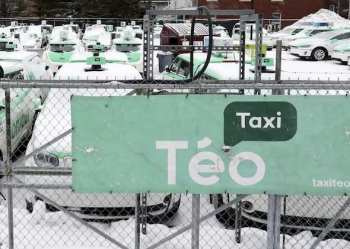 Launched with great fanfare and lots of promise three years ago, the city’s electric taxi company says it will cease operations.

Téo’s drivers were the first to learn of the news when they showed up for work at the company’s garage on St-Patrick St. early Tuesday and were greeted by security guards barring them entry.

A total of 460 drivers employed by Téo Taxi received notices of dismissal.

Hours later, at a news conference, the company’s management confirmed rumours circling for about a week that the company would suspend operations.

“It is with a broken heart and lots of sadness that we have to put a halt to the activities of Téo Taxi,” said Dominic Bécotte, a co-founder of Téo’s parent company, Taxelco.

He said the company was not profitable, and requests to the government for dynamic pricing — such as adding a surcharge during peak periods, charging extra to ride in a Tesla, or a fee to reserve a car in advance — had fallen on deaf ears.