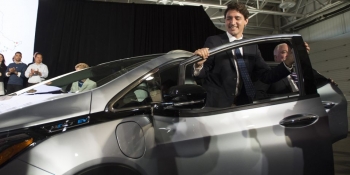 Lord have mercy, we’re heading to the polls — and what a beggar’s banquet we have to choose from. Justin Trudeau’s failings hardly need more amplification, those waiting for Andrew Scheer to “get comfortable in his role” would appear to have a good deal longer to wait, and just how did Jagmeet Singh get outflanked by both the Liberals and the Greens? Then there’s Elizabeth May’s phantasms and Maxime Bernier, the only man seemingly less suited to politics than Yours Truly. A seemingly rag-tag bunch, to say the least.

Mine, however, is not to comment on larger political discourse. Instead, I’ll stick with the subjects — actually, subject — to which I am at least slightly versed; automobiles. Or, more precisely, the policy promises that might affect the cars we drive. In other words, that portion of the parties’ election platforms that will affect Driving readers.

Read the whole news at driving.ca