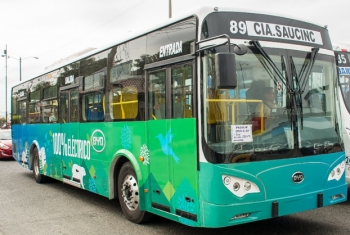 The transit operator in the Ecuadorian port city of Guayaquil has decided to convert its entire fleet of transit buses over to electric with the purchase of 20 of BYD’s 12-meter, 80 passenger buses.

The transition to electric transit is expected to set the city of Guayaquil apart as a leader in clean technologies, a fitting role for the city long known as the ‘Gateway to the Galapagos’.

The move could make the private transit fleet operated by Saucinc the first fully electric city fleet in the world, according to the press release announcing the deal. The order of the 20 new electric buses for the city will establish the first electric fleet in the country and set Guayaquil apart as a leader in clean transportation technologies in South America.

The purchase represents the culmination of years of research by the city into possible solutions to clean up its transit fleet before it decided to move forward with BYD. The process commenced with a 5-month long pilot that ran from November 2017 through March of 2018 to validate that the bus could meet the transit needs of the city. Over the course of the pilot, the bus ran an average of 250 kilometers per day, moving 72,000 people around the city.

In a poll, 85% of riders during the pilot approved the transition to electric buses for the city, which come with a new rate specifically for zero emissions buses. The new fleet of BYD K9 buses will also bring wifi and air conditioning to city riders, offering creature comforts to lure more riders onto the zero emission vehicles.

The electric bus project includes the installation of the first fast charging station in the city, which will also serve to support a deal for a fleet of electric taxis for the city that is currently being developed.