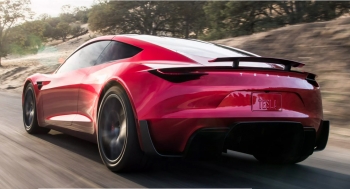 Despite still being about two years away from production, the next-gen Tesla Roadster is seemingly already having an impact on the industry as a prototype.

Christian von Koenigsegg, the head of supercar maker Koenigsegg, says that the Roadster’s performance was “embarrassing” them and they had to up their game following the unveiling.

In an interview at Pebble Beach with Top Gear, Koenigsegg said that Tesla has thrown down the gauntlet with the new Roadster:

“We kind of had our future mapped out, and then we heard about the new Tesla Roadster and its insane acceleration numbers, and we thought ‘damn that’s put the gauntlet down’.”

When unveiling the car, Tesla CEO Elon Musk said that he wanted to deliver a major “smackdown” to gas-powered vehicles with the new Roadster – removing the halo effect that they have on the industry.

The specs, especially the acceleration, were quite shocking:

Koenigsegg said that they look at the numbers to make sure it was actually possible and felt embarrassed:

“We thought, ‘this is not OK’. We wondered whether it was possible, and yeah, it’s possible. Then we thought, ‘OK how do we deal with it? This is embarrassing.’”