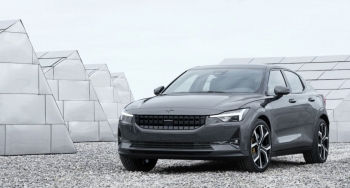 This is the Polestar 2, a new battery EV from Volvo’s performance brand

Back in the olden days Polestar was Volvo's in-house tuning arm, the same way BMW has M Division or Mercedes-Benz has AMG. Polestar would take regular Volvos like the S60 and V60 and breathe on them, adding more power, a sportier interior, and often a coat of shocking blue paint. In fact, a Polestar S60 even held a production car record at the Nürburgring until Porsche and then Alfa Romeo came along and beat it. But that was the old Polestar. In 2017, Volvo revealed it had bigger plans for the name.

Now, Polestar is a brand of its own, one that will specialize in electrified performance vehicles. We saw the first of these, the Polestar 1 plug-in hybrid, when it was revealed in 2017. That car will be a carbon fiber-bodied coupé with 600hp (447kW) that will only be made in small numbers. For the rest of us, there's the Polestar 2, which was unveiled on Wednesday morning. It's a mid-sized, five-door fastback sedan, built using Volvo's Compact Modular Architecture which also underpins the XC40 crossover.