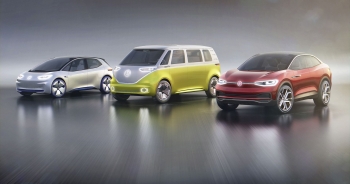 Volkswagen Group is serious about electric vehicles. It may not look that way if you judge by its battery-powered cars on the road today — in the U.S., it currently offers only the Volkswagen e-Golf. But, its various brands will be producing millions in just a few years from now. In fact, it’s just increased its planned output from 15 million to 22 million over the next ten years. That’s ambitious by any standard.

The boost in production expectations comes with a dramatic increase in the number of models that will be offered. Previously, it had planned on 50 different models. Now, that number is 70. They will, of course, be spread across the dozen brands it now owns, though we can expect them to be concentrated on the Volkswagen, Audi, Seat, and Škoda marques.

The models will, for the most part, be based on the MEB (Modular Electric Toolkit) platform. That’s what will underlie the production forms of the VW I.D., the I.D. Crozz, and I.D. Buzz, as well as the Audi A4 e-tron, Seat el-Born, and Škoda Vision iVwe just saw revealed at the Geneva Motor Show.

Importantly, the company also says it is implementing a comprehensive decarbonization plan and is targeting 2050 as the date to be completely CO2-neutral. That would put it in line with the goals set out in the Paris Climate Accord.