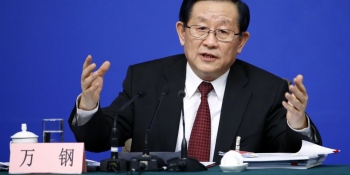 When China's father of electric cars talks, even Elon Musk has to listen

He is China’s “father of the electric vehicle movement,” the man credited with putting more than two million electric vehicles on the road in the world’s most populous country. He is vice-chairman of China’s national advisory body for policy making, a role, says Bloomberg, “that ranks higher than a minister and gives him a voice in the nation’s future planning.”

He single-handedly, if one believes all the accolades lauded on this German-trained engineer, launched his country’s EV subsidy program, bent automakers local and foreign to his vision of reducing emissions, and perhaps more importantly in the eyes of the mandarins he had to lobby 20 years ago, convinced the Chinese government that the then-untested electric car was the technology that would liberate China from its dependence on imported oil.

He is, quite simply, the reason China is home to one of every two electric vehicles sold today.